What To Do If You Can’t Sleep 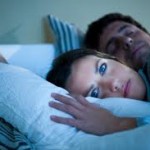 70 million people in the U.S. have some type of  a sleep problem that is treatable. Insomnia affects more than 30 million people, while another 6 million have moderate to severe sleep apnea where breathing briefly stops. More than 6 million have some type of body jerking motion that will wake them up. When the body is at rest (sleeping) this is when the body repairs, rejuvenates, heals and burns fat. 98% of all fat is burned when you are sleeping not during the waking hours. The autonomic nervous system has two parts: The sympathetic part (high gear) and the parasympathetic part (low gear). Those parts of the nervous system shift back and forth between  high and low gear depending on your activities. The “shifting” is done automatically. Many people are what is called “sympathetic dominance” which means that they are running in high gear and cannot “shift” into low gear even when they are sleeping. Someone that runs in high cannot get into a deep sleep. These people would be considered a light sleepers.